One of the best talks I saw at TED was by Aimee Mullins.

She was wearing a skirt, but it took a couple minutes before I realized that her legs were artificial. Both of her legs were amputated below the knee when she was one year old.

Recently she was speaking at a grade school, and before she walked in, she overheard the teacher tell the kids, “Make sure you don’t look at her legs! It’s rude.”

So she started her talk by having all the kids gather around to feel her legs, and ask anything.

Later she asked the class, “If I wanted to jump over a house, what kind of legs would I need?” The kids brainstormed springs and kangaroos, before one kid asked, “Why would you only jump over a house? Why not a skyscraper?”

She loved that their perception of her was as a superwoman, not a disabled woman.

Later, she was out to dinner with friends wearing a new pair of legs.

Her friend said, “Why are you so tall today?”

I love it. Even among friends, she’s seen as having an unfair advantage.

It makes me wonder what things you call a handicap could also be seen as an advantage. 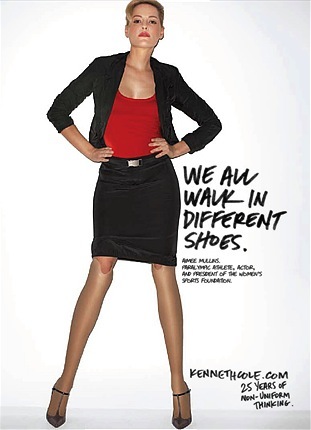