Yesterday, on my 40th birthday, I biked 100 hilly miles up New York City’s Hudson River and back. I’ve been biking for a year, usually going 25-50 miles, but never 100. Though I was cursing every hill for the last 30 miles, I think it’ll be easier in the future.

I’ve only been doing this for a year, but love it. For those that might be interested, here’s the story:

I went to Bangalore, Hyderabad, and Calcutta, but stayed near my center-city hotels. Walked city streets and alleyways.

I knew I was only seeing 0.001% of the country. As if someone came to Europe but only went to downtown Berlin, then left. Though I knew I’d be back for more soon.

In July I went to Vietnam with my music teacher Kimo Williams’ big band, and at first walked around town, as usual.

Next day, luckily, the band rented mopeds and we drove around for an hour. Just turned right from the hotel and went straight off into the countryside.

It was one of the best times of my life! I couldn’t wipe the smile from my face.

I decided that’s what I needed to do next time I went to India. Get out into the countryside on a moped or motorcycle.

One day I was talking with Antony Bryden when he said something about India.

He said, “Yeah! For nine months. Six months of work, then for three months, my girlfriend and I rode our bikes from Chennai around the south, up the west coast, past Delhi, and into Nepal.”

“Wait. What?! You rode your bike across India? You pedaled? Not motorcycle? Bicycle?”

He said it wasn’t that hard if you’re not racing. You start with 30 miles a day. Then 40 the next day. Then 50. Lots of stopping and resting and sight-seeing. And eventually you get up to about 90 miles a day, which is about 8 hours of biking in a 12-hour day.

I knew this is what I needed to do. The perfect balance of seeing the country, being in and among it like I was in Vietnam, while getting some incredible exercise.

So that’s when I started biking. Bought a steel frame touring bike, on his recommendation.

I started riding, and what a rush! I absolutely love it. It’s a great feeling, made extra-great knowing it’s good for me.

The first time I went 50 miles over many hills, it completely exhausted me. I had to stop many times and felt dead afterwards. It took 4½ hours.

Three times later, doing that same 50-mile route, I was just lost in thought, and arrived before I knew it. Hills that previously tortured me now passed without notice. Total time: 3½ hours.

Next time, it was raining. I was pushing extra-hard to get home and out of the rain. I left the turnaround point just one minute before one of those super-pro bike racer guys, all decked out in logoed spandex, super-fit, with a light carbon racing bike. About 45 minutes later he passed me, but slowed to say, “You left only one minute before me, but it took me 45 minutes to catch up with you. That’s impressive! Great pace!” When I got home, my total time had been 3 hours — and I wasn’t exhausted.

I’ve never been athletic, and I’m still not, so that was a huge ego-boosting achievement for me. I think I’ve found something I’m good at. 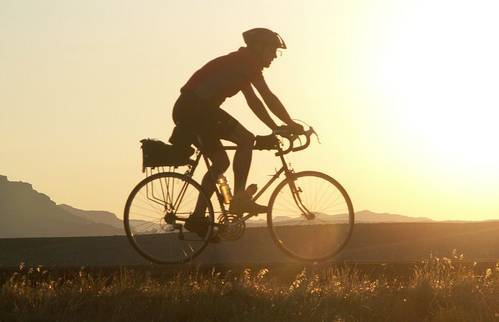