I was at a Kurt Vonnegut talk in New York a few years ago. Talking about writing, life, and everything.

He explained why people have such a need for drama in their life.

He said, “People have been hearing fantastic stories since time began. The problem is, they think life is supposed to be like the stories. Let’s look at a few examples.”

He drew an empty grid on the board, like this: 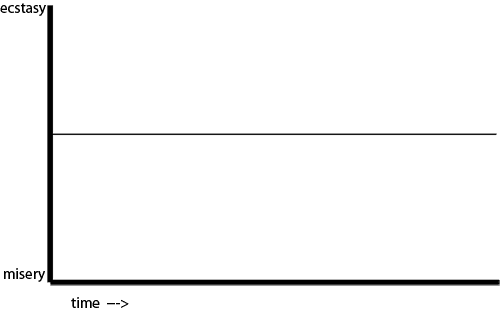 Time moves from left to right. Happiness from bottom to top.

He said, “Let’s look at a very common story arc. The story of Cinderella.” 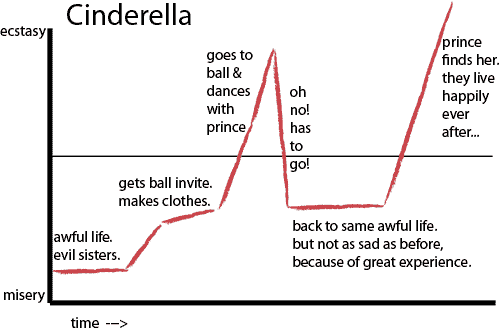 It starts with her awful life with evil stepsisters, scrubbing the fireplace. Then she get an invitation to the ball! Things look up. Then the fairy godmother makes her a dress and a coach. Even better! Then she goes to the ball, and dances with the prince! This is great! But then it’s midnight. She has to go. Oh no. Sadness. Back to her humdrum life scrubbing the fireplace. But it’s not as bad as before, because she’s had this encouraging experience. Then, the prince finds her, and the happiness factor is off the chart! Happily ever after.

“People LOVE that story! This story arc has been written a thousand times in a thousand tales. And because of it, people think their lives are supposed to be like this.”

He wiped the board clean and said, “Now let’s look at another popular story arc: the disaster.” 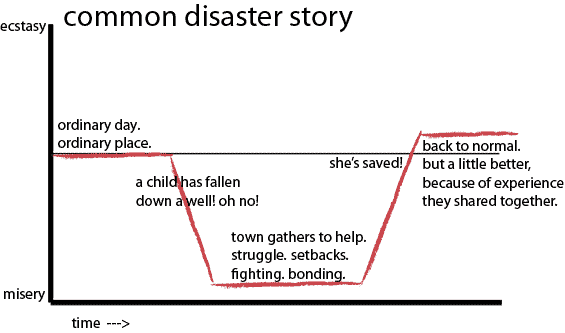 It’s an ordinary day in an ordinary town. But something horrible happens! A child falls down a well! The whole town gathers to save her. Old grudges surface, but are belittled in the light of this tragedy. Rifts are bonded as people work together. The child is saved, and all is well. But notice it’s a little better than it was before, now that this incident has brought them all closer together.

“People LOVE that story! This story arc has been written a thousand times in a thousand tales. And because of it, people think their lives are supposed to be like this.”

But the problem is, life is really like this... 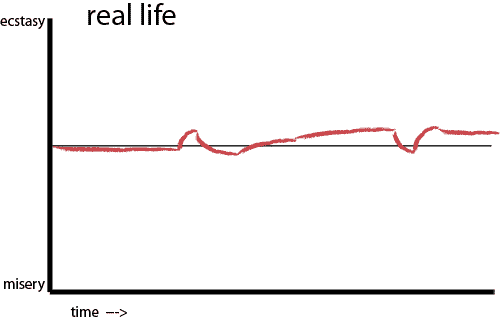 Our lives drifts along with normal things happening. Some ups, some downs, but nothing to go down in history about. Nothing so fantastic or terrible that it’ll be told for a thousand years.

“But because we grew up surrounded by big dramatic story arcs in books and movies, we think our lives are supposed to be filled with huge ups and downs! So people pretend there is drama where there is none.”

We’re trying to make our life into a fairy tale.