Guitar on my shoulder, I took a taxi to the airport, and the driver said, “A musician! What kind of music do you play?”

After telling him, and asking where he’s from, he said, “I’m from Nigeria! You must hear the best Nigerian musician, Fela Ransome Kuti.” He wrote it on a piece of paper for me.

Back in suburban Chicago, I had to drive 20 miles to a good record store, to ask them if they had anything by Fela Kuti. I got “O.D.O.O.”, “Teacher Don’t Teach Me Nonsense”, and “No Agreement” on cassette.

It’s a 30-minute-long song. No chord changes. Just different aspects of the arrangement coming in and out. Little interlocking ingredients, each featured enough for you to understand and appreciate their syncopation against the others. His talking-singing vocals come in, then the piercing female background vocals answer him in chant. Then it breaks down to keyboards and a sax solo.

Funky. Unique. Amazing. It was life-changing for me. It became my favorite music. Afrobeat.

I went to Berklee College of Music that year, and told everyone about Fela Kuti. He came to perform in Boston, but I couldn’t get anyone else to come with me, so I went by myself to a little club, and pushed my way to the front, elbows on the stage, looking straight up at Fela and his 20-piece band for two hours. Awesome.

Berklee had an Afrobeat ensemble, so I joined as a guitarist for two semesters. I loved being just one rhythmic instrument in a big syncopated arrangement. Each of us a tiny but crucial part of the groove.

In 1990, I moved to New York City and saw Fela perform at the Apollo Theater. 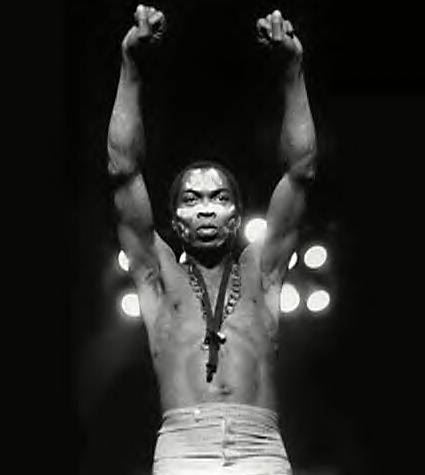