In 1992, in Tokyo, I dated a girl named Masako. After our month together, she moved to London. We lost touch.

In 2008, I was in London for a few days. I wondered if Masako still lived there, sixteen years later.

A minute later, she walked by.

In 1993, I had a pen-pal from Argentina named Lucia. She was studying Norwegian and planned to move to Oslo, Norway, some day. We lost touch.

In 2007, my band was on tour in Oslo for a few days. I was sitting in a park, wondering if Lucia ever moved there.

A minute later, she walked by.

Today I’m in Singapore. I went to the library to write. It was very busy, with nowhere to sit, so I walked from room to room before I finally found the last free seat.

I noticed that the guy next to me was reading a book I recommend often: Ego Is the Enemy.

His name is Thomas. We had emailed a few days ago.

Some people like to think that there are no coincidences. They say, “What are the odds of that?” as if to mean that it can’t be chance. Life feels more amazing to them if it all has meaning. (Seeking patterns in randomness is called apophenia.)

I like to think that everything is a coincidence. Life feels more amazing to me if it has no meaning. No secret agenda. Beautifully random.

What are the odds of winning the big lottery? Fifty million to one? Ah, but that’s if you’re being egocentric and thinking only of yourself! Someone always wins it. So what if you look past yourself and ask, “What are the odds that this rare thing will happen to someone?” Almost 100 percent. 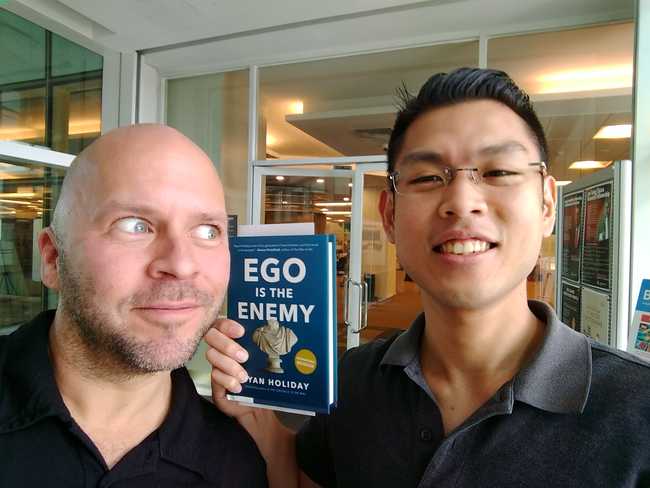 (Thomas Diong and I, today, at the Singapore library.)