Since my son was born five years ago, I’ve spent at least thirty hours a week with him, just one-on-one, giving him my full attention. But I’ve never written about parenting before because it’s a touchy subject — too easily misunderstood.

So why am I writing about it today? Because I realized that the parenting things I do for him are also for myself. And that’s an idea worth sharing.

Here are the things I’ve been doing for my son since he was born:

Whatever he’s doing right now, that’s the most important thing. So I encourage him to keep doing it as long as possible. I never say, “Come on! Let’s go!”

We’ll go to the beach or forest, and make things with sticks and sand for half a day before he’s ready to switch.

Other families come to the playground for twenty or thirty minutes, but we stay there for hours.

Nobody else can play with us like this. Everyone else gets so bored.

Of course my adult mind wanders to all the other things we could be doing. But I let it go, and return to that present focus.

I’m very ambitious and try to do a lot with my life. But when I’m with him, I stop everything else. Phone off. Computer off.

I try to see things through his eyes — to put myself into his mind. When he gets upset, I try to remember what it was like to be his age and relate at that level.

Of course I’m tempted to check my phone. Most of us have that addiction now. But I ask myself, “What’s more important?” and leave it off.

I want him to have a wide range of inputs into his senses.

We go play in as many different forests, beaches, mountains, and towns as possible, touching and smelling everything we can.

I play very diverse music in the background. When we play at home, he’s listening to Persian traditional, Indian classical, ’60s jazz, glitch, Bartok, Stevie Wonder (from ’72 to ’76), lots of Bach, Bulgarian choir, or whatever.

We’ve had season tickets to the New Zealand Symphony Orchestra since he was three, and never miss a concert. I took him to the opera Carmen, and he was riveted from start to finish.

We get a few new books from the library every week and read together for an hour every night.

We watch a huge variety of movies, but always from start to finish without interruption, so he gets the full story arc. For the big Disney blockbusters, we watch the Portuguese or Chinese translations.

And now, my point:

The reason I’m finally writing about this is because I realized that I’m doing all these things for myself as much as for him.

By entering his world, I’m letting go of my own, like meditation.

I thought I was being selfless. But actually, like most things we consider selfless, they benefit me as much as him. 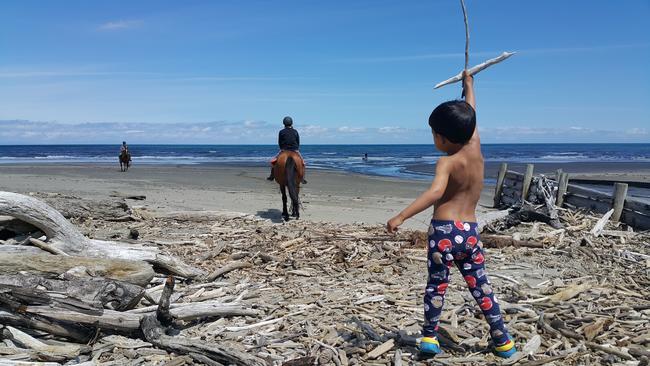 Photo of him at our favorite beach in Paekakariki.

P.S. You won’t find his name or face online. I don’t think it’s right to put someone online without their permission. He’ll put himself online when he’s ready.