In 1991 I was 22 years old, and had moved to New York City to be a professional musician. I had a little home studio, and was doing some random gigs around town.

My roommate, Hoover Li, was an assistant engineer at a huge recording studio in midtown. Ryuichi Sakamoto was there recording his new album “Heartbeat”.

Ryuichi mentioned to Hoover that he was looking for a guitarist for his next tour of Japan. Manu Katché on drums and Victor Bailey on bass. But no guitarist chosen yet.

Hoover said, “My roommate is a great guitarist.”

Hoover came home around midnight, and told me the big news. I was already a fan, since I loved his album “Beauty”, and thought this would be a dream gig.

Hoover gave me a tape of the new (unreleased) Heartbeat album, but told me he needed it back in the morning.

I listened to the whole album carefully. There was no guitar on it. I was already imagining parts. I started playing along with it.

I stayed up all night writing guitar parts for his album, recording them in my home studio, then mixing together his album — now with my guitar — back into a new master.

In the morning, as Hoover was waking up to go into the studio, I gave him his tape back, but also a 2nd tape of the whole album, now with my guitar, for him to give to Ryuichi.

I only slept a few hours, but woke up with the feeling like that wasn’t enough. I had to do more to prove I really wanted this gig.

I bought six of his older CDs, and listened to them all day. One had a particularly hard cello part in the middle. I decided to transcribe it and write out the transcription in perfect bass-clef notation in pencil on staff paper, just to show him I could read and write music. Again, I asked Hoover to deliver it to Ryuichi, telling him I really wanted this gig.

The next day I got a call from his manager, giving me the dates, asking if I was available! A month in Japan. Two weeks of rehearsal in Tokyo, then two weeks touring the country.

I said yes, but the manager said they were undecided, and would get back to me. (Oh no! Are they changing their mind?)

Hoover said Ryuichi wanted me to come down to the studio to meet him. I did. We barely spoke. He’s very quiet. But at one point I said, “Your manager said they’re undecided,” and Ryuichi just smiled and said, “I decide. Not them. I’ve decided. Don’t worry.”

Whoo-hoo! Got the gig!

When we were rehearsing in Tokyo, all the other band members were given very specific charts, but Ryuichi would say to me, “Just do what you did before.”

I did OK, but as the youngest, I was definitely the punching bag of the other band members. It was rough.

Later that year, we got hired back to play the World Expo in Seville, Spain, this time with Darryl Jones on bass.

I made the fatal mistake of thinking they were providing the outfits for us, like they had done in Japan. So just 30 minutes before showtime, (televised and all), I’m in shorts and a t-shirt, asking where everyone else got their nice outfits, and found out we were supposed to bring back the ones they gave us in Japan. Ooops! They tossed some other clothes on me, but were gravely disappointed, and I never heard from them again. (I’ll never know if it was because of the clothes or my playing.)

Oh except a year later, I was living on the Oregon Coast, and got a little happy birthday postcard from Ryuichi himself.

My personal lessons learned from this story: 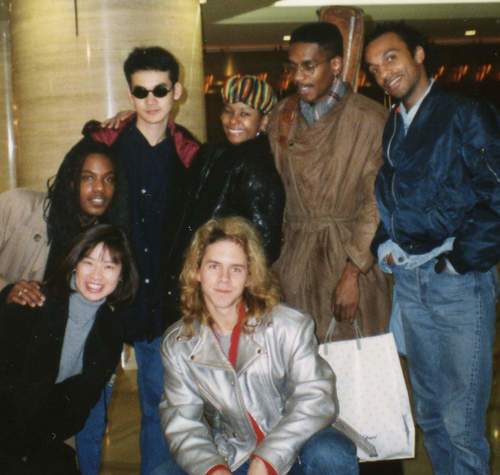 In this picture, from left to right, is translator Mei Fang, Everton Nelson, Satoshi Tomiie, Vivian Sessoms, Victor Bailey, Manu Katché, and me at the bottom.