I’m in New York City. Across the street is a man pacing on the sidewalk. He’s insanely barking something at the top of his lungs. Everyone is avoiding going anywhere near him.

I get closer. I try to figure out what he’s screaming about. Finally I hear it. “20% coupons for window shades! 20% off! Window shades! Get your coupons here!”

A week later, I’m hanging with a friend in Union Square. The whole time we’re talking, there’s some man yelling in the background. It’s almost like he’s singing a repetitive phrase — always an F falling to a D. Again I’m curious, so I get closer to hear what he’s yelling. “Help feed the homeless! Help feed the homeless!”

Ah! So he’s trying to help! But again, everyone is avoiding him.

Then it made me think: How many of us do this?

Maybe we weren’t getting the results we wanted, so we thought if we shouted louder, more people would hear.

But people avoid those types. If someone always pitches his business to friends at parties, he won’t get invited to parties anymore.

In England, I heard the word “barking” used as slang for “insane”. (It’s short for “barking mad”, get it?)

When promoting, make sure you’re not barking.

When things aren’t working, be smarter, not louder. 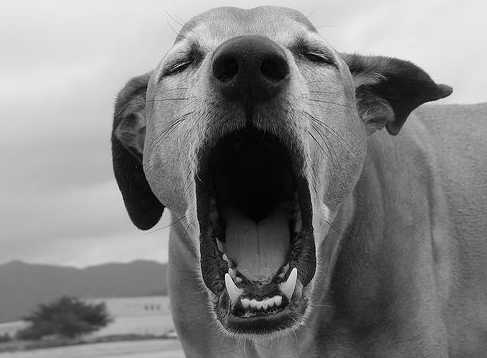